When the Earth Calls... August in Berlin
​Join Gaia where ever you are...

" I Now Invoke the Three Star One,
The Three Star Being who has come to service all.
I Now Invoke The Three Star One
So That We May All Be Lightened Up To Reach Our Full Potential And to Know Who We Truly Are.
I Now Accept the Presence Of this Three Star Being as a guiding consciousness
on this planetary body, and in my life
as a presence to empower my creations for the benefit of all
And I Allow Her to Penetrate
All Aspects of My Consciousness, All Aspects of My Mission,
All Aspects of the Earth's Work i was born to do.
With this Three Star Being I Join Forces to Promote World Peace on Planet Earth.
As Well As All Other Places In this Universe.
The Three Star One aspect of the Divine Feminine
Now Descends To LIghten the Earth
As She Awakens the Minds of Humanity, The Hearts of All,
And Resides in the core of my being.
We Merge Now into One Focus of Light Which Contains The Trinity,
Which is the Balance of All Things
Which is a Reflection of the Three Universes
Now Joined Together in One Thought Consciousness
That Represents a harmonic path of Will, Love and Wisdom
for all who embody here on earth.
Nek Hak Nol
Nek Hak Nol
Nek Hak Nol "
(entering Gaia's core for all through Berlin, Germany)

With ease & grace, the unseen preparation & locations come into awareness as orchestrated & inspired by Gaia's Creatives and Earth Euphoria teams...

“The most beautiful thing we can experience is the mysterious.“ Albert Einstein
Gaia weaves a bit of Nature's Magic with a visit and sharing of a little  Holly – Divine Magic (Ilex aquifolium) ... Open to the divine magic of nature to create miracles with you. This essence supports your imagination and manifestations to align with proper use of your will with divine will and to co-create using the white light of the Christ and the green light of Nature in service and love. When working with nature is your path of service, let Holly bring you the deeper connection to direct communion with the alchemy of divine miracles and magic. To inspire greater co-creation for the good of all...  August 8, 2019

Nature begins to create new songlines for the souls of humanity...
Love brings us closer...
Levitation brings sovereignty ​
as gravity lightens up for our remembrance in a moment of timeless stillness
​~ on August 9, 2019

Water elementals dance with The Molecule Man,  a sculpture, designed by the American artist Jonathan Borofsky. The thirty meters high metal sculpture stands between the Oberbaum- and the Elsen Bridge and was placed there in 1999.
The holes, which cover the three bodies are described as “the molecules of all human beings coming together to create our existence”.
~ on August 10, 2019

Berlin's Got Talent! at Mauer Park.  And soon will be receiving nature's grounding of universal energetics to serve awakening cultural creatives and inspire performing artists who seek to add their unique visions and sounds for earth restoration and unified new earth visions. (Galactic Stargate for a Golden Age)  A magnet for singers and performers of all kinds, the park attracts crowds for
ad hoc karaoke sessions on Sundays, all embellished by fanfares and circus jongleurs aplenty. And nearby to the talent shows, there are numerous white tents..   Co-creation begins ~ on August 11, 2019 ... Gaia sets the template for these projects to be seen... feel it first.

#discoverConservation in Tierpark Berlin  Zoo Berlin is Germany’s oldest zoological garden and home to the world’s largest variety of species. Almost 20,000 animals of around 1,300 species live in the 33-hectare zoo. Until humanity surrenders the exportation of animals to create zoos nature will continue to over light all species in captivity in support of their highest well being and evolution. Because it is in the sphere of the full moon alignments, our Planetary Logos and Gaia will be watchful of all species needs and this organizations conservation projects with the help of Ancestral guardians and angelic teams  ~ on August 12, 2019

An Earth Euphoria portal is offered to the City of Berlin.  Earth Euphoria is defined here as a natural state of happiness, self-confidence and well-being in harmony and unity with the diverse forms of life on earth.  It's about living in the awe and wonder of the beauty of Nature, of the forces of creation in the Cosmos. It is the celebration of the genius of every being, and the majesty of our world.  Earth Euphoria is feeling elated in a comfortable, healthy balanced expression.
Every day being creatively at ease with your decisions and choices. This portal will be opened for the period of the full moon alignments to co-create the highest potentials for the convergence.  It will remain available to access as desired and remembered by the people of Berlin and the million of visitors to the Tiergarten Park.  ~ August 13, 2019

Gaia orchestrates healing grace in gratitude and appreciation. For the many skills and genius gifts that have existed for some time throughout world cultures and have been suppressed and tucked away, quietly being sought after and found by those who seek...
With the assistants of healing spirits who work from higher realms with nature to enhance the evolution of dimensions and purpose....
There are those who know how to release battlegrounds of compacted energies through time and space, and those who had fallen there fully ascended into the light. Gaia,Ascended Masters, Metatron and Nature realms honor and empower continuance of musical creativity as the Victory Tower is made vibrationally new now. To be a beacon of diversity in awakening conscious community. Gently with the power of love and primal force to thrive... ~ on August 14th, 2019.  history: https://www.berlinloveparade.com 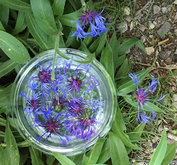 Todays essence offered into the Berlin Euphoria Vortex, in honor of Germany's Flower representing the country... this one is from Mt. Shasta made 2018. Cornflower (Mountain) - Relief Valve (Centaurea Montana)
​When stress is building and you find your self saying "I can't take it anymore" " I'm so ____ I can't see straight" or any of your own expletives take Mountain Cornflower to assist you to adjust your internal pressure gauge of self control. Allow your body to relax and find relief from the ways you hold onto energetic stress in your body, mind, emotions. Move through the energy shifts of daily life change with awareness and choice of ease with Cornflower's support from Vortex Essences. For those sensitive to global earth changes keep a bottle with you for surprise shifts.  Sleep well and new dear Berlin ~ on August 15th, 2019 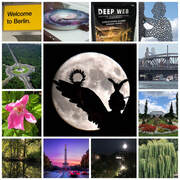 Day into Night into alignment for planetary support & continuance.Full Moon  ~ Berlin
Noah Pred's culminating mix IFS033 1/3 builds upon track IFS032 which sparked many around the world...  Gaia continues to support waves of source expansion and flow in Berlin since the August Full Moon...take it in and grow, Breath it into your soul and know...  https://soundcloud.com/noahpred/ifs033
Much gratitude and love for all your many gifts and support. May all awaken to their gifts and bring the new earth home.
​~ on August 15th, 2019 updated Sept 3, 2019 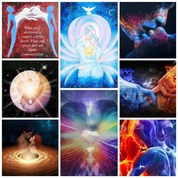 Celebrating the new gifts Gaia ignites planetary twin souls now embodied on earth to empower the synchrony of co-creation with nature with humanity’s awakening heart coherence and the power of love to evolve the old duality consciousness into a new living blueprint of remembrance. Metatron embraces us with focus and clarity to remember and thrive as we truly are meant to live here on earth. And so it begins for all...  Blessings throughout the realms. We are capable of great achievements doing what we love together. ~ on August 16th, 2019

Thank you to all the Berliners that made my stay welcoming and filled with joyful and touching synchronicities...and Visitors that came to rendezvous with a new destiny and growth cycle of Synesthesia. Let yourself play the many many colors of music and notes of your heart's desires to be whole...  (Synesthesia as Romantic ideal: in which the condition illustrates the Romantic ideal of transcending one's experience of the world.)
Here is to many new event horizons... Kathryne-Alexis & the Earth Euphoria & Vortex Teams.